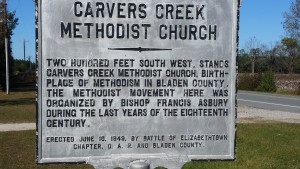 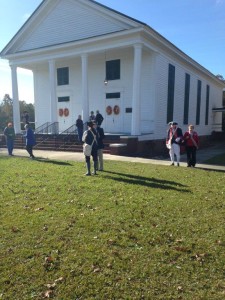 Thomas Brown was born in Bladen County on 17 Jan 1744.  He was an early Revolutionary War patriot leader in the region serving as a member of the Committee of Safety in Wilmington and also was appointed by the Provincial Congress to serve in a military capacity under Col Thomas Robeson.  He distiguished himself as a leader during the Battle of Moore’s Creek Bridge as well as the Battle of Elizabethtown and was active in suppressing Loyalist uprisings in the region.  He served as a North Carolina Senator in 1785, 1786 and 1788.  He later attained the rank of General in the local militia.  He married (1) Sarah Bartram and (2) Lucy Bradley.  He died on 24 Nov 1811,  He is buried in the Carvers Creek United Methodist Church Cemetery.