During an awards ceremony at Pamlico High School on April 18th, Rear Admiral Jay DeLoach, VP of the New Bern Chapter, presented the Bronze Good Citizenship Medal to Cadet Zayne Perkins of the Naval JROTC unit. Cadet Perkins is an outstanding young man who received numerous awards and commendations throughout the evening. The award ceremony turned into a change of command ceremony whereupon Cadet Perkins was promoted to Cadet Lieutenant Commander and assumed command of the entire NJROTC unit for the next academic year. The Pamlico High School NJROTC unit has been the recipient of the Distinguished Unit Award (DUA) for three consecutive years and is currently in line to capture another DUA for this academic year. 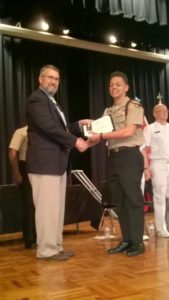